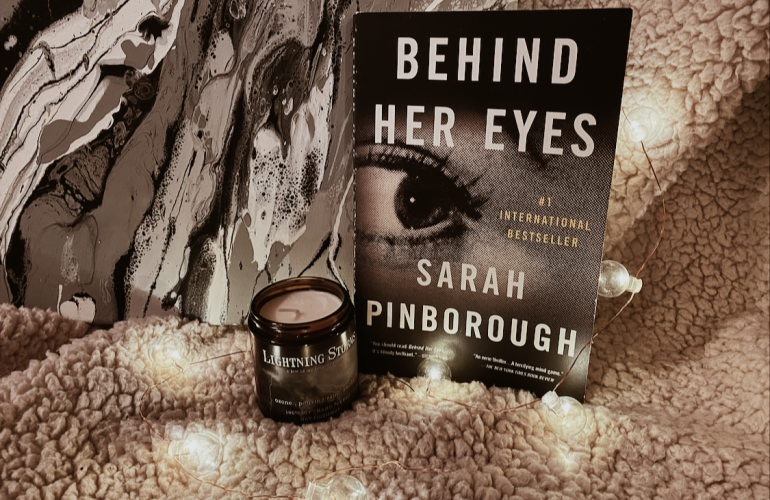 Hi friends! I finished this book a while ago but never managed to get around to writing a review. I’m going to try and make this one a little shorter than my normal reviews in an attempt to get back on track. Hope you enjoy! Also, this book is set to become a Netflix Original series in February, so keep your eyes out for that.

Behind Her Eyes is a thriller by Sarah Pinborough that follows the life of Louise, a singe mother who has a romantic run-in at a bar one night, only to find out that the man, David, is her new boss – and he’s married. Soon after, she meets Adele, a woman who’s new to town and looking for friends, and also happens to be David’s wife. On the outside, they seem to have the perfect marriage, but as Louise becomes more entwined with both of their lives, she learns there’s much more to their relationship than meets the eye.

I’m going to be honest, I wasn’t expecting to enjoy this book as much as I did, mainly because I haven’t had the best experiences with domestic thrillers as of late. This novel definitely isn’t perfect, and the last chapter of the novel definitely knocked my rating down a star or so, but overall I was really pleased with this novel and am looking forward to the Netflix series next month.

I think this novel was a really creative take on a standard domestic thriller. No spoilers, but lucid dreaming plays a large role in the plot and that isn’t something I’ve seen utilized a lot in books I’ve read recently. I enjoyed the character development and the level of mystery about the character’s backgrounds and motivations for the majority of the plot; it was intriguing without being overly vague and frustrating.

I also thought that this novel made good use of alternating perspectives and alternating timelines. Usually I’m not a fan of when a book implements both techniques, but the execution wasn’t too confusing this time around and I felt it helped to encourage character development and build suspense. I also think that the first major twist at the climax was great and fun and well-written. My mouth was open by the end.

I finished this book about two weeks ago at this point, and the one thing that has really stuck with me that greatly diminished my enjoyment of the book was the final chapter. The first twist in the novel was wild and caught me off guard. I thought it was a really unexpected and horribly great ending to the plot.

Then the final chapter came along and gave readers another twist that seemed very forced and was employed as more of a ‘gotcha’ moment than one that had any actual impact on the story. It might not bother others as much as it annoyed me, but – without giving too much away – the final reveal fundamentally changes one of the characters and thus invalidates all of my feelings about the character development and relationship dynamics of the plot up until that point, and not in a good way.

Behind Her Eye exceeded my expectations and is a solid 4 out of 5 star read. I think even thriller fans who aren’t as into domestic thrillers (like me) could get a lot of enjoyment out of this one. Just ignore the final chapter of the book and you’ll be good to go.

Buy Behind Her Eyes by Sarah Pinborough here.*

*as a reminder, I am an Amazon affiliate and make a small commission off of purchases made using my link.

View all posts by Sarah Weyand