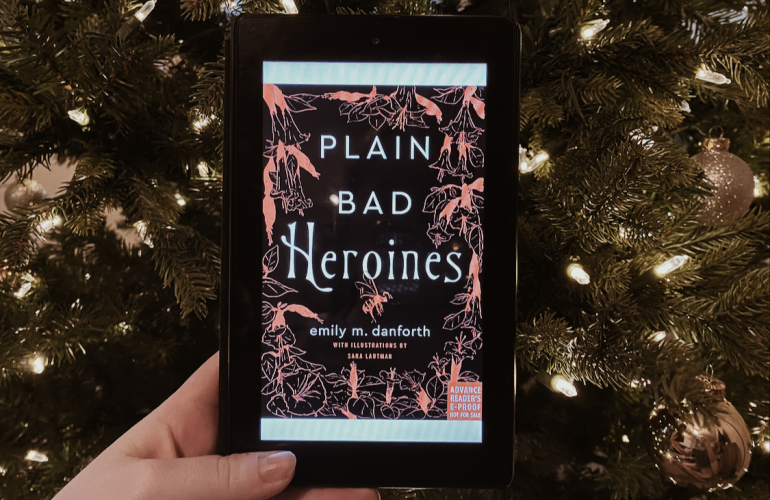 Plain Bad Heroines is Emily M. Danforth’s adult debut that follows sets of heroines past and present. At the Brookhants School for Girls, three young women are found dead, the same novel found in their hands, the causes of death somewhat mysterious. Today, three women travel to the school again to take part in a film based off a book written about the events past (authored by one of our present-day heroines). Upon arriving back at Brookhants, strange happenings being to occur again, and it becomes clear to everyone that things aren’t as they seem.

This book could have been SO GOOD. The mere conception of this plot idea points to an incredibly thoughtful and clever author. The plot is largely character-driven and the development was fantastic. But then….nothing ever happened. There are certainly many things about this novel to praise, but ultimately the sentiments that will stick with me with this book was that it was a long read with an unsatisfying build.

The pure plot construct of this novel is incredible. It’s confusing when I say this is a book about a movie based on a book about deaths at a school stemming from a club about a book. What an incredibly complex plot to execute, and it was done so well with minimal confusion. The dual plotlines were also both interesting and captivating (although the fact that one of the perspectives also alternated timelines as well was confusing). I think I preferred the plot with Harper, Meritt, and Audrey, but by no means did I dread the other timeline.

In terms of other positive notes that don’t need to be as expanded on: I enjoyed the atmosphere of both plotlines; it gave me gothic vibes which I always love and greatly enjoy. The horror elements were creepy and atmospheric but not downright scary and tended to build suspense and tension more than attempt to scare the reader, which is a type of horror I enjoy as well. I really enjoyed the LGBTQ+ representation in this book (almost every main character and secondary character!), and while the romance was not a driving point in the plot I did appreciate the dynamics between Merritt, Audrey, and Harper specifically and how their relationship concludes by the end of the novel.

With so many overt positives that cover nearly every aspect of this book, I was admittedly surprised at the disappointment I felt upon finishing. I think the main issue I have with Plain Bad Heroines is that it builds to a sort of nothing. The horror elements present in the earlier parts of the plot are never fully explained, and the two plotlines running concurrently throughout the length of the novel never intersected or interacted in any way in the end, like one would generally expect them to do. It just left me with a strange and unsatisfying feeling, especially since the book was so long (and dragged in parts, especially toward the beginning) and had so much page space to intertwine and connect these said plotlines.

My next point is more a matter of differing expectations, but I was under the impression that ere would be more focus on the school or the film shootings themselves than there actually was; honestly I had previously defined this book as a semi-dark academia, which it absolutely is not. In fact, the original heroines that the film is based on are not present at all in the past plotline of the story (it focuses on two faculty members instead). In the present-day story, the written events encompass the hours in which the Brookhants deaths aren’t being filmed. Again, this wouldn’t have been as much of an issue if I knew more of what to expect, but I felt like the plot was slower and less focused because of these choices.

I think I’m right in-between on this book, so I’ll have to give Plain Bad Heroines 3 out of 5 stars! Some people will absolutely love this book. If you’re looking for good LGBTQ+ representation, light atmospheric horror, and character-driven plot, this is your gal. I enjoyed the overall plot ideas and characters a good amount, but ultimately the length and unsatisfying ending kept me from liking this book as much as I wanted to.

*as a reminder, I am an Amazon affiliate and make a small commission off of purchases made using my link.

View all posts by Sarah Weyand